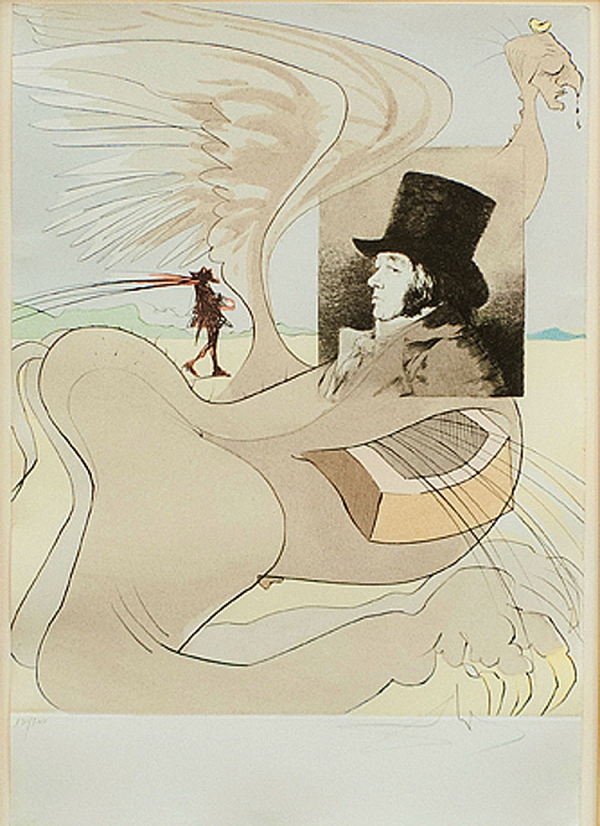 You can see rare prints by Francisco Goya at the New Mexico Museum of Art’s Renaissance to Goya: Prints and Drawings from Spain, the only U.S. stop of a special traveling exhibition from the British Museum. Learn about Salvador Dali’s twist on one of Goya’s most famous works below, and come see it at Matthews Gallery on Canyon Road.
In 1797, Francisco Goya embarked on a political art project that almost brought him up against the Spanish Inquisition. In a series of 80 aquatints entitled Los Caprichos (The Whims) he outlined the “innumerable foibles and follies to be found in any civilized societies.”
The hardly whimsical opus was a critique of 18th century Spain, which Goya depicted as full of deformed monsters and foolish beasts. The artist avoided punishment at the hands of the ruling class when the king spoke up for him, but the prints were still withdrawn from public sale in 1799.

174 years later, The Sleep of Reason Produces Monsters (left) from Los Caprichos was considered one of Goya’s most iconic works, and another Spaniard by the name of Salvador Dali decided to create a Surrealist tribute to the series. In the etching Frontispiece for Goya Suite Dali used the first image from Los Caprichos, a self-portrait of Goya in a top hat.

Dali drops Goya into a universe even more bizarre than that of the original Caprichos, stitching his predecessor’s visage atop the body of a dragon-like beast. A second, more monstrous head with a drippy nose and lumpy halo emerges from behind Goya, and a shadowy figure in the distance leaves a trail like a comet.
Is Dali’s remix another critique of Spanish society, refreshed for the weird world of 1973? The artist drops a slippery hint in this work’s alternate title, Lenguado Menguado. Lenguado could mean “flat-fish” or “sole”, and menguado is either “well-dressed” or “diminished”.
So, Dali could be calling Goya a stylish fish or a diminished one. The title might refer to the worn—or fashionable—shoes of the pedestrian in the background. In any case, the artist seems to be commenting on Spain’s obsession with appearances, a theme first explored in several of Goya’s Caprichos. Of course, Dali was himself an offender when it came to sartorial dalliances, but that adds some spice to the criticism.
View Dali’s bizarre reworking of a classic Goya print at Matthews Gallery, and connect with us on Facebook, Twitter and Pinterest for more news from Canyon Road.