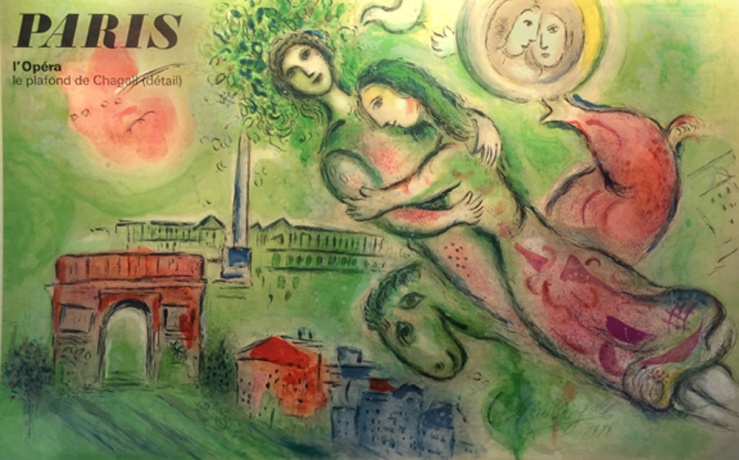 When Marc Chagall (1887-1985) was commissioned to redo the ceiling of the Paris Opera in 1963, not everyone in the City of Lights was happy about it. The Russian-Jewish artist didn’t have a drop of French blood, and he was also a modernist. Critics worried that his vibrant palette and “primitive” style would clash with the pseudo-classical interior of the building. It was sure to be “die Faust auf’s Auge“—a punch in the eye—for cultured opera fans.
Chagall might not have been everyone’s favorite, but he certainly had good credentials. Before moving from Russia to Paris in 1910, he studied under a well-known theatre designer in St. Petersburg. Years later in 1958 the Paris Opera hired him to design the sets and costumes for Maurice Ravel’s ballet Daphnis et Chloe. That same year, he embarked on his monumental stained glass project for the Metz Cathedral. 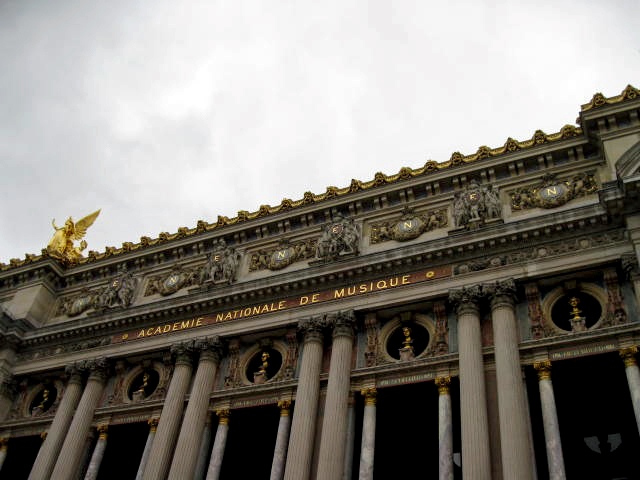 Paris Opera
After he saw a performance of Daphnis et Chloe, French minister of culture Andre Malraux had no doubt Chagall was capable of covering the 560-square-meter stretch of ceiling surrounding the opera house’s crystal chandelier. Ignoring the bluster of the arterati, he set Chagall to work painting panels for an enormous removable frame that would cover the original Baroque-style mural by Jules-Eugene Lenepvue.
Chagall divided the space into several color zones and wove together scenes and characters from the most beloved operas and ballets. The mural would honor the works of fourteen composers, from Mussorgsky to Mozart and Beethoven to Tchaikovsky.
Chagall’s ceiling (or, in French, le plafond de Chagall) was unveiled on September 23, 1964 during the finale of a Mozart symphony, the artist’s favorite composer. As the music swelled the great chandelier lit up to reveal the mural. Et voilà:

Chagall’s critics were (for the moment) struck dumb as opera goers first set eyes on what is now considered one of the great marvels of Paris.
The mural was quite a novel sight, but there’s one portion of the work that Parisians would’ve found familiar. The opera house also asked Chagall to design a limited edition poster for the ceiling’s debut. The artist based the poster on a portion of the mural featuring Tchaikovsky’s Romeo and Juliet. The famous lovers hover in the air above Paris, perhaps locked in a heavenly embrace after their tragic deaths.

Detail of Chagall’s Ceiling showing Romeo and Juliet
Just 5,000 “Paris L’Opera” prints were made. The poster at Matthews Gallery is signed in pencil by Chagall himself.
To get this artwork for your sweetheart, make sure to contact us before February 7 so we can ship it in time for Valentine’s Day. Connect with us on Twitter, Facebook and Pinterest for more gallery news!
*Special thanks to our friend and fellow art lover Paul, who gave us this idea and provided some of the images*