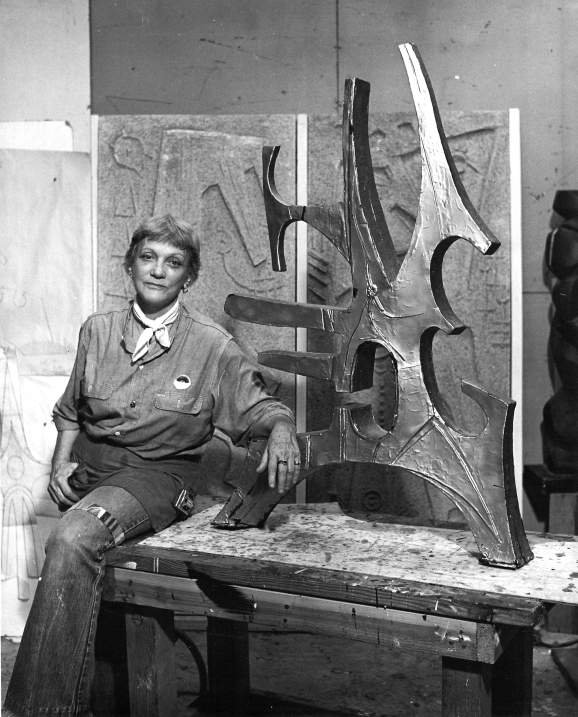 It’s just across town, but the complex that houses our storage unit seems universes away from the cheerful adobe utopia of Canyon Road. We punch in a code and roll through the gate into a desolate world of sharp edges. Seas of asphalt release masses of hot air and long rows of dull aluminum doors form the impenetrable walls of an industrial fortress. 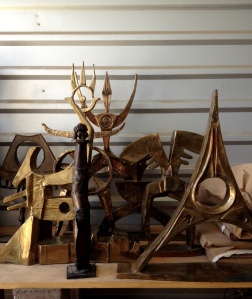 As the shadows grow longer the sun’s rays swing sideways and those doors become enormous reflectors. The forbidding barrier transforms into a glowing, many-paneled modernist painting—Gerhard Richter’s Strip series in metal. At this time of day, it’s easy to imagine the units as a series of chests concealing mysterious treasures. What secrets hide behind this shimmering force field? Luckily, we have one of the keys.

With one great heave, we send the door to our space skittering up into the ceiling and find ourselves peering into another, much more fanciful, metallic landscape. We’re here to take stock of the life’s work of Hannah Holliday Stewart in preparation for a visit from some interested collectors.

Polished, patined bronzes large and small cluster on shelves, tabletops and patches of cement between stacks of cardboard boxes. They’ve accrued a thin layer of dust since we last visited, but it hardly dampens the strange energy that seems to simmer just beneath their surfaces. Stewart’s graceful abstract forms hold all the power that they possessed when we first laid eyes on them last year in Stewart’s studio, where they’d been sitting quietly since her death in 2010. It’s jamais vu: the feeling of encountering something you’ve never seen before. 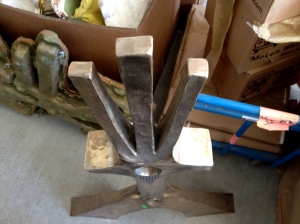 Stewart was born in Marion, Alabama in 1924. She received her graduate degree at Cranbrook Academy of Art, moved to Houston and swiftly embarked on rapid rise that was uncommon for female artists at the time. At the crest of a new wave of social changes, Stewart and other artists such as Ana Mendieta and Carolee Schneemann revived old legends and symbols that identified the woman as a powerful creative force capable of crafting her own destiny. Under Stewart’s paradigm, Nefertiti reclaimed her throne, Icarus had feminine curves and the symbol of the Aquarian Age was a densely muscled female torso.

Much of Stewart’s work is in bronze, a medium that set her apart from some of her female contemporaries who worked with fabric, wood and mixed media. It was a material that allowed her to look to the promise of the future as well as the legends of the past. In one corner of our storage space is a stack of boxes filled with overflowing folders. Along with the career-spanning work that was left in Stewart’s studio, the artist’s family gave us access to all of her personal files. That’s how we found an artist statement she once scrawled in a notebook:

[My] early interest in natural forces has sustained me throughout my life as a sculptor. My goal is to render visible the hidden realities of pent-up contained energy. The direct fields of reference are Sacred Geometry, Astronomy, Myth & Physics … Each Sculpture is an energy form, the movement arrested in space, a form sustaining an energy. My work is a response to these patterns and delineations and communicates with viewers through the universality of symbolism and form. 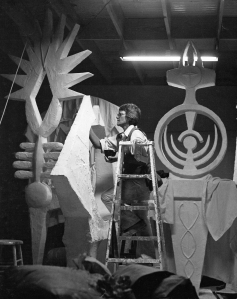 To contain these gargantuan forces, Stewart was often compelled to produce her work at a monumental scale. Photographs in her files show her roaming through a forest of many-legged monoliths in her studio, or manipulating their twisty canopy atop a spindly ladder. In 1972 she was commissioned to create a monumental sculpture for Houston’s Hermann Park, a rare honor for a female sculptor—especially one who was known for her non-objective work.

The spotlight shone bright on Stewart for many years: she exhibited at the Smithsonian, the San Francisco Museum of Art, the High Museum of Art and the Dallas Museum of Fine Arts. Then, 20 years before her death, she abruptly left the Houston art scene without saying goodbye. 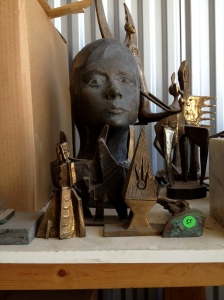 At a studio in Albuquerque that we would visit after her death, the artist spent the remaining years of her life producing sculptures in solitude. The mystery of her departure from the art world has yet to be cracked. Many of her friends from Houston were still puzzling over it in her obituary.

Perhaps there are clues to the more shadowy parts of Stewart’s life hidden in her files, or in the beautiful invented language that she often etched into her sculptures. It’ll take more dusting than we have time for today to unravel the intricacies of her life and work, but one thing is clear: Stewart helped pave the way for a new generation of women sculptors.

As we reach for the long rope hanging from the door, we take one last look at Stewart’s peculiar menagerie. A bronze self-portrait peers out from a tangle of supernatural creatures on a tabletop, its eyes blazing in a shaft of sunlight. Then the treasure box slams shut.

3 thoughts on “SECRETS OF THE WAREHOUSE: Hannah Holliday Stewart”