When John Sloan invited Beatrice Mandelman and Louis Ribak to visit Santa Fe in 1944, the two artists were on the rise among New York City’s avant-garde. They had ties to Hans Hoffman and Fernand Leger, and were often mentioned in the same breath as Jackson Pollock. Sloan, who had been summering in New Mexico for years, had a reputation for spiriting away his favorite artists to the Desert Southwest. During their trip the recently married duo took a train to Taos and decided to stay.

The move marked a radical change in Mandelman and Ribak’s artwork. “We had to start all over again,” Mandelman said. “We spent the first couple years painting landscapes.” They were known for their figurative paintings in New York, but in this radically different environment their focus shifted to pure abstraction. They were trailblazers for a new wave of artists called the Taos Moderns, a movement that enlivened the Taos art colony but enraged an older vanguard of academic painters with ties to the Taos Society of Artists of the 1910’s and 20’s. To this tight clique of romanticists, the newcomers stuck out like colorful cacti—particularly Mandelman. 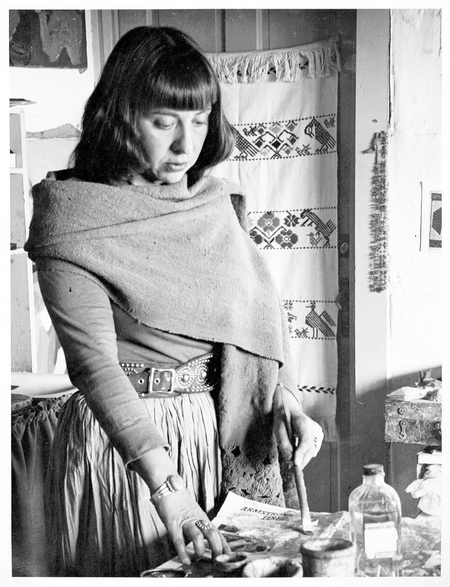 “She worked with full abstraction at a time when most artists were not daring enough to do so,” writes David L. Witt in his book Taos Moderns, noting that Mandelman considered herself “the first of the second generation of artists in Taos.” The voice of a young, female abstract painter had never been part of the remote art community.

Far from the big city, Mandelman developed a new appreciation for the natural world and humanity’s relationship with it. By the late 1940’s she was developing an abstract symbol system to express her emotional responses to the landscape. Her elegant compositions didn’t mimic the lines or palette of the high desert, but they perfectly evoked the strong, solitary spirit of its inhabitants.

The mixed media painting in our collection was likely done in the 1950’s. Early in her experiments with abstraction Mandelman chose a muted palette, but here brighter colors poke through. This more expressive style was inspired by Henri Matisse and Mandelman’s former teacher Leger, and allowed her to explore the highs and lows of human experience with great vigor. Cool Wind‘s undercurrent of chilly blues and bright accents of orange and red call forth the sensation of a shiver passing up the spine.

As the evenings get cooler in Santa Fe, we’ve developed an ever-evolving passion for this piece and the innovative artist who created it. Learn more about Beatrice Mandelman on our website, and connect with us on Facebook, Twitter and Instagram for daily gallery news.

2 thoughts on “ONE WORK OF ART: Beatrice Mandelman’s ‘Cool Wind’”

We had a delightful encounter today with a visitor from New York - Mr. Josh Hamlet - who saw a 1952 Leger lithograph titled “La Partie de Campagne”. When asked if he was an admirer of the artist’s work he told us of a time when he saw a painting by Leger at MOMA and was so moved by it that he got a tattoo of the piece. Thanks to Mr. Hamlet for reminding us again of the power and importance of art to the human spirit. Scroll through the images to see Mr. Hamlet’s tatoo and our lithograph. #léger #tattooart #modernart #moma
New in the gallery! Dan Rizzie is one of the most successful collage artists of the 20th century. He uses diverse materials, often incorporating layers of newspaper, paint, wax, dirt and filigree into his works. His symbology is equally layered. Rizzie is fascinated with hermetic and alchemical signs and symbols, and embeds the same sense of mystery into his work. DAN RIZZIE Asphidium 31.5 x 24 inches 1986-87 $ 3,500 #collage #contemporaryart #symbol #mixedmedia #worksonpaper
Leon Gaspard (1882 - 1964) was a Russian artist who found inspiration in Taos, New Mexico. Gaspard moved to Taos in 1918 and remained there until his death. While there, Gaspard tirelessly attempted to capture the beauty of the local Native American culture and the natural landscape. Leon Gaspard Pines, NM #1 Oil on Board 17.25 x 15.25 inches $12,500 #landscape #oilpainting #impressionism #modernart #newmexico
Michael Wyss was born in Switzerland in 1952. Wyss was inspired by the sacred icon paintings in the churches where he grew up, and has always been primarily a figurative artist. In 1996 Wyss began using computer technology to expand his formal capabilites. Since then, he has been synthesizing the influences of the old masters with digital technology. Michael Wyss Der Luftsprung 1985/1986 Oil on Canvas 50 x 50 inches $18,000 #modernism #figurepainting #oilpainting #contemporaryart
Joseph Fernand Henri Léger (1881-1955) straddled the many artistic movements that arised in the 20th century. He was a central figure in the development of cubism and futurism. In his later work, like this lithograph, one can even see the beginnings of Pop Art with its bold lines and color. FERNAND LEGER La Partie de Campagne Color lithograph (Printed by Mourlot, Verve edition) 28.5 x 34.5 in Framed 1952 $ 3,750 #modernart #cubism #futurism #abstractart #pop #color #lithography